GOSS reshuffle: timely or too late?

Two years after the formation of the Government of South Sudan, South Sudanese are still waiting to see the fruits of the peace. A government that started almost from scratch is being bombarded left, right and center for corruption, inactivity and ineffectiveness. We shall be taking stock, but let me first say some few words on the reshuffle.

The reshuffle is long overdue, as far as I can see. GOSS turn out to be corrupt and the only thing they were good at was squandering government money. No one in the government is clean from the president down to the last MP. They all want to make money at the expense of the people without delivering any services. The only plus for Kiir is that he started acting.

For instance: government contracts were awarded to companies without the normal bidding processes, kickbacks pocketed by the dealers. In the end no work gets done and no one is accountable for the mess. Riak Machar is said to always ask new companies coming into south Sudan "what is my share in this venture?" Unbelieveable.

Rebecca Garang, the wife of our great hero Dr. John Garang de Mabior surprised everyone with her behaviour. Initially thought to be the champion of the CPA and anti-corruption, she has yet to explain where all the money had gone for the reconstruction of the roads in Juba. 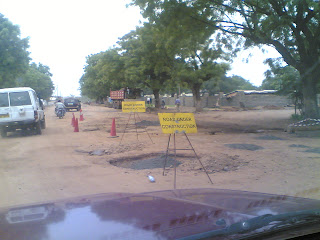 Juba town is a shame to move in. The roads are worse than they were before the GOSS take over. Potholes everywhere. Instead, she was busy siphoning money into her private businesses. Bogus Italian companies were given huge contracts to repair the roads in Juba one year ago, but up to now the only thing they do is fill the potholes with concrete (see photo), something never heard of in the world!

And the electricity in Juba? And the finance Minister scandal? How about the Ministry of Health? The woes are too many. I leave them for next time.

The reshuffle? Better late than never, at least.
Posted by Black Kush at 10:50 AM

Nice to have you back.. did not know that you were in Juba for the conference.

Anyway, I can't believe they are just patching up the roads and not really starting to build it like it out to be. Where did you take the pic? Was it close to the UNDP, SCC resturant place close to the SudaTel office?

Cool, man. That is exactly where the photo was taken. It is the second time they are patching the roads with cement! Call anyone in Juba and they will confirm it to you.

These guys are really playing with us common citizens . . .