The Islamist leader of the Popular Congress Party, Hassan el Turabi is arrested in Khartoum, again.

Has the crack down on opposition started or it is a kneejerk response to his call for uprising. The next few weeks and months will say . .
Posted by Black Kush at 12:16 PM No comments: 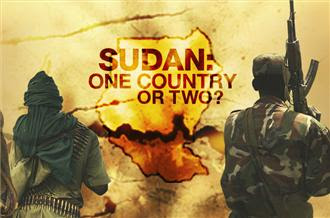 The Al Jazeera TV Website has a wide coverage of the Southern Sudan Referendum. The reports are generally good, comprehensive and balanced, although occasionally they tend to focused more on the underdevelopment and fear of violence, more than the dream of the Southern Sudanese quest for independence and freedom. I guess like most of the Arab World, Al Jazeera stands behind unity of the country.

Now that the threshold of 60% has been reached, there is no turning back. Southern Sudan has worked out of the Arab World. No more Arab League etc. 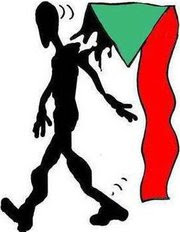 Posted by Black Kush at 1:26 PM No comments:

A separatist's voice in the North

As the world sees the likely break up of the country, a Party in the north is celebrating the vent, calling the South Sudan a "cancer that must be cut off". That is the .Justice and Peace Forum Party. That has always been their stand in the Al Intibaha newspaper.

However, some parties are criticising them for celebrating!
Posted by Black Kush at 9:30 AM No comments:

The birth of a nation 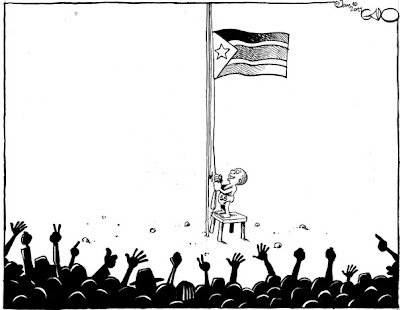 And the new country shall be called . . .

As the referendum for independence kicks off to a jubilant start, with thousands of people turning up to vote in the historic event, the search will soon start for the name of the soon to be born new Country.

Southern Sudan now has a flag and a national anthem. What is left is the name and that will complete the transformation from a region to a country, Africas' 53rd.

Name have been floated ever since the dream about an independent South Sudan started. Names like South Sudan, New Sudan, Kush, Juwama (formed from two letters of each main towns of Juba, Wau and malakal) and event Nile Republic, there is no definite consensus yet. The debate will definitely become intense in the coming months.

It would be good to stake claim to the name Sudan, by adding "New" or "South" to it. The name, meaning "Bilad as Sudan" or "Land of the Black". Many of the people of Northern Sudan are Arabs, not blacks. It suits the people of Southern Sudan more than them. That is, if the Darfurians and the Nubas will not raised hell as well!

The arguements for most of the proposed names are easy, but sometimes quite silly. I have read many articles that proposed many of the names above, but the most plausible arguement for Nile Republic or State of the Nile comes from this article. Some quotes are needed here.

At one point, he (Prof Ali Mazrui) pondered why there was no country in the Nile River basin that bears the name of this great river, best known as the longest river in the world.

He cited examples around the world and in Africa where countries got their names from the rivers that passed through them. Examples in Africa include: Zambia and Zimbabwe, from the Zambezi River; The Democratic Republic of Congo and the Republic of Congo, from Congo River; the Republic of Senegal, from the Senegal River, Niger and Nigeria from the River Niger, etc. He reminded his audience that he expected to see a new country emerging on the Nile when Southern Sudanese vote in their referendum in January 2011, and wondered if that was an opportunity for the ancient river.I could not believe my ears because that is the deafening fact that Southern Sudanese need to hear.

This was quite an eye opener. Coul it be the answer?
Posted by Black Kush at 9:30 AM No comments: 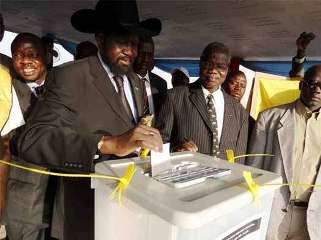 The CSIS Africa Program cordially invites you to attend:

A day after the people of Southern Sudan begin voting on whether to remain in Sudan or become an independent nation, International Crisis Group's new Africa Program Director, Comfort Ero, and its AU and Sudan Special Advisor, Fouad Hikmat, will discuss the post-referendum challenges, the role of regional leaders, and expectations for the final six months of the Comprehensive Peace Agreement.

Center for Strategic and International Studies - CSIS
Posted by Black Kush at 11:39 AM No comments:

D-Day: Vote for Separation is here!

The day and hour is finally here! Thousands of Southern Sudanese are flocking to polling stations to decide the fate of their region!

Independence oyee!
Posted by Black Kush at 10:38 AM 1 comment: