A sad day in Abyei

Within weeks of their deployment, four Ethiopian UN Peacekeepers had died in a landmine explosion in Abyei. It marked the beginning of a long struggle for the peacekeepers. This had occured in an area controlled by Khartoum armed forces.

In the world today where countries had signed to the Ottawa Protocol banning the use of landmines, Sudan has indescriminately planted thousands of mines in Abyei after their occupation. It was in complete desregard to international law.

Sudan had signed the treaty banning the use of landmines. The UN must summon the Sudanese Ambassador and condemn the use of these landmines. This has added more to the woes of Khartoum, and Bashir is going to pay one day . . .

Condolence to Ethiopia, president and people . . .
Posted by Black Kush at 8:05 AM 1 comment:

Darfur Peace Agreement signed? Why am I having this feeling that Sudan had been there before . . .

This article by Lamis Andoni shed light on some of the most critical issues facing the Arab governement: their failures to embrace diversity in the region.

The division of Sudan into two states is a dangerous precedent. The Arab world has to draw the right lessons from if it wants to avoid the break-up of other Arab states into ethnic and sectarian enclaves.

The birth of South Sudan is first and foremost a testimony to the failure of the official Arab order, pan-Arabism, and especially the Islamic political projects to provide civic and equal rights to ethnic and religious minorities in the Arab world.

Read here from Al Jazeera
Posted by Black Kush at 10:40 AM No comments: 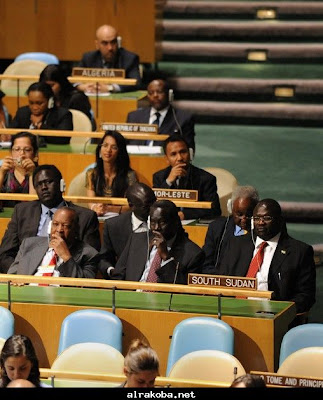 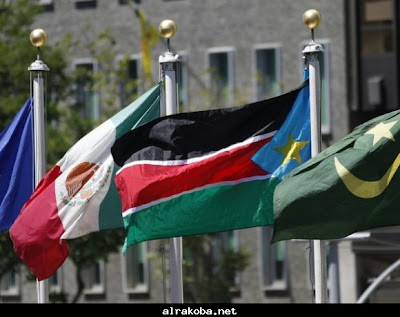 Posted by Black Kush at 8:45 AM No comments:

Things are moving very fast for the new nation. The UN Security Council has recommended to the General Assembly the recognition of South Sudan as an Independent State. 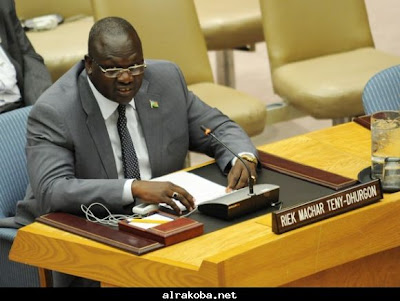 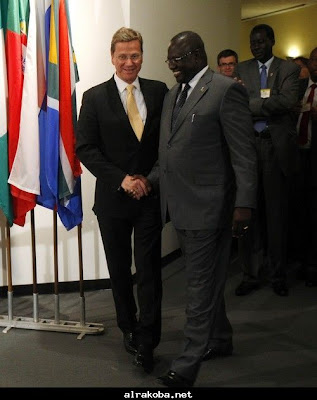 Stamps out and a new country code: +211 for South Sudan 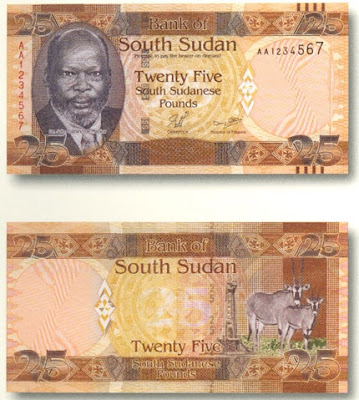 Posted by Black Kush at 2:08 PM No comments: 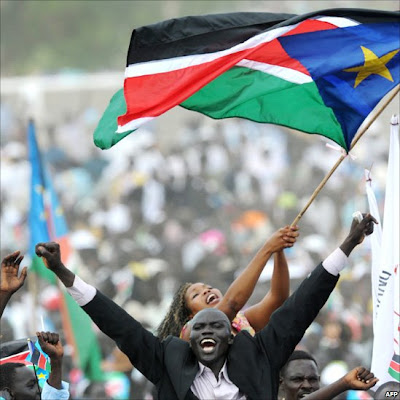 9 July 2011 - In his inaugural speech as the President of the Republic of South Sudan, Salva Kiir Mayardit today urged South Sudanese to make their cultural and ethnic diversities a source of pride and strength, not conflict.

Speaking after he swore an oath as president of Africa’s newest state, Mr. Kiir said the emerging republic would promote security, justice, liberty and prosperity.

“In order to develop our country and deliver on the important aspects of our national development plan, it is critical that we must wipe out corruption,” he said.

Also attending the celebration were hundreds of foreign heads of state and regional organizations, including the European Union, League of Arab Nations, Inter- Governmental Authority on Development and African Union.

Other dignitaries included UN Secretary-General Ban Ki-moon and UN General Assembly President Joseph Deiss.
“Today, we open a new chapter – a day when the people of South Sudan claim the freedom and dignity that are their birthright,” Mr. Ban told the gathering.
“Together, we welcome the Republic of South Sudan to the community of nations,” he added. “Together, we affirm our commitment to helping it meet its many responsibilities as a nation.”

Emotions ran high as the Republic of Sudan’s flag was lowered and that of the Republic of South Sudan (RoSS) was raised for the first time. The RoSS flag was the same one used during the liberation struggle by the Sudan People’s Liberation Movement/Army.

“My husband was the first person to raise this flag in Boma Mountain in 1990. I was really touched when this flag was lifted up,” said Bonguot Amum, government Chief Whip and Chairperson of the Sudan People’s Liberation Movement (SPLM) Caucus in the South Sudan Legislative Assembly (SSLA).

“Though he is dead, I am very happy for the total freedom and liberation of South Sudanese. I want to see united South Sudanese, development, equality, transparency and accountability to our people,” said Ms. Amum.

As the country’s first President, Mr. Kiir signed the Transitional Constitution of South Sudan and then took his oath.

Calling on disputing Ethiopia and Eritrea and war-torn Somalia to find peace, President Kiir promised troubled states of Sudan that they would not be forgotten.

“I want to assure the people of Abyei, Darfur, Southern Kordofan and Blue Nile that we have not forgotten you. When you cry, we cry; when you bleed, we also bleed,” he said.

The atmosphere of the event was punctuated by ululations and the sound of trumpets, with many eager participants pushing to reach the front to view visiting dignitaries.

People waved RoSS flags and many wore jackets bearing its colours, despite the intense heat. Several youth had even shaved their hair off and painted their heads with the flag’s colours.

As crowd members witnessed the new nation being born, their comments were various.

“I have waited … for this day to come” said 24-year-old University of Juba student Stephen Kuong. “Now that freedom is here I can celebrate … We have been deprived of freedom for long.”

Some, like 50-year-old Mary Keji, were purely interested in witnessing the event. “I came here at 6.00 this morning because I want to (see) the declaration of South Sudan as a nation. This is what I have been waiting to see in my life.”

Forty-five-year-old Thomas Obura was relieved to actually be present on Independence Day. “I was not sure if I would reach this day. I was born during the war and grew up during the war until the CPA was signed.”

The celebration concluded with a 21-gun salute and the South Sudan national anthem.

I have been away for long time and many things have happened:

All these the work of the NCP. I wonder what else the NCP have up their dirty sleeves. The only thing we know is that they are angry that South Sudanese have rejected to be slaves forever.

If they are using it as bargaining tactics over Abyei, we shall see in the near future.
Posted by Black Kush at 8:43 AM 2 comments:

The Sudanese President Omar el Bashir has accepted the final results of the Southern Sudan Referendum. Southern Sudanese have overwhelmingly voted for seccession in the January 9th - 15th plebiscite. That is one hurdle overcome, as the country comes face to face with a split.

What remains is the post seccession issues that must be dealth with as soon as possible.
Posted by Black Kush at 3:23 PM 2 comments: