Like September 11 after it years later or the Space Shuttle Columbia disaster or the death of John Garang de Mabior, I still remember vividly where I was and what I was doing when the news came filtering in that Diana, Princess of Wales died.

Just from the news coverage marking ten years after her death, you could feel it that her memory is as strong as ever. In my school days, we use to have a beautiful young lady called Diana too, and naturally, became to be known as Princess.

Following her humanitaian work and visits to charities, I had this the vaguest of dreams to see her visiting our little corner.

Diana maybe the last voice of change in an establishment that has lost touch with its people. The British monarchy is on its way out. It would have been fun what it would be like if she had been alive today, although devorced from the future king.

Well, I leave the conspiracy theories about her death alone.
Posted by Black Kush at 8:30 AM 4 comments:

The words of Martin Luther King still rang fresh in the minds of people who heard that epic speech on 28 August 1963.

"I have a dream that my four little children will one day live in a nation where they will not be judged by the colour of their skin but by the content of their character."

It is a dream that we hope would have been true to us in Sudan. With such diverse cultures and languages and religion and race etc, how beautiful it would be to judge us Sudanese as by the content of our intellect.

Sorry, the original picture was lost in transcription. Here is another one. It is much older, though. 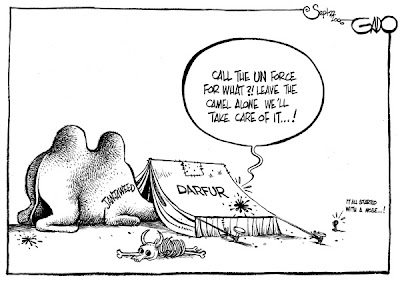 There are few moments that one can sometimes be proud of the country, even for afew days!That day was last Sunday when Hilal FC bashed their age-old rivals 3 nil! It was a triumph worth celebrating! Ahli had the shock of their lives. And El Merrikh is progressing nicely too.

Am proud of our national team too. The fact that they qualified for the African Nations Cup after more than 30 years is quite amazing. But will they shine, or just show up and return home? For the love of the game, we wait and see.

And by the way our team is there in Osaka too for the IAAF! Three cheers for Muna jabir and the team! I am counting on more gold than Algiers for Sudan.

Atleast there is something to smile about, to take away the depression of Darfur.
Posted by Black Kush at 9:22 PM 5 comments:

I don't want to be skeptical but the whole story stinks. It maybe another ruse to get at the opposition . . . :(
Posted by Black Kush at 9:17 PM 4 comments:

What's in a name? A chinese family is naming their child "@" claiming it means "love him". Well you may think this is strange but wait:there is an Australian who wants to call a child "Hell", another wants to use the name "4real". That is the reality!

And the Virginia Tech shooter goes by the name "?". Call that weird? Although parents have the right to give ther children names, they should also think about the child later. Child ren can grow up traumatized as a child when other children make jokes of their strange names. Starnge names make good jokes you know.

In my part of South Sudan, starnge names are not given, but what ends up sticking are the nicknames: Abu Ras, etc. What is your take?
Posted by Black Kush at 12:19 AM 9 comments:

Africa has lost one great musician, the Congolese Bialu Madilu System, aka Ramsès II or also the Grand Ninja, who died Saturday in Kinshasa . (Link in French!)

Madilu was one of the musicians who worked with the late Franco Luambo Makiadi of TP OK Jazz. Madilu took over upon the death of Franco and has inspired many musicians with his uplifting rythms, in the style of the grand maestro Franco rumba music.

Here he plays one of his songs.

Black Kush: one year of blogging!

Yes, that is right. BK is one year today. Phew! I couldn't believe how time flies so quickly. It was like last week that I put fingers to key board and started this blog on August 11th . . .

Everyone has their own milestones, and for each stone at the miles, look back and take stock. I was just wondering where to begin. Maybe at the very beginning. In the beginning there was a story:

My first post was about the LRA menace in South Sudan. However, one year on, they have not yet reached any agreements. Yeah, giving them another year may help. Then it had been Darfur most of the time. From the initial acceptance of the hybrid force last year, its later rejection and to another acceptance again! A long journey. But I had always believed that Sudan will capitulate in the end, the pressure is just too unbearable! Darfur cost Bashir the chair of the AU.

And the Chinese came for a visit too! The presence of the Chinese leader boosted Bashir's stand, for he found an ally in the person who wants his oil. However, China gets bad publicity about "Genocide Olympics". Thanks, Mia and company!

Meanwhile in the South, the UN was accussed of abusing children and four got booted out. Corruption got the better of the GOSS, nickname the Government of self-service and lots of reshuffle. Yeah. So far, all seems to be fine on the Southern front.

I am looking forward to the next 365 days in which peace comes to Darfur, the refugees return to their homes, stability maintained in South and Eastern Sudan and everyone gets to live on more than 2 dollars a day! Amen.

I thank all of you out there for coming around always, reading about Sudan, South Sudan and Darfur and the commenting on the issues raised here. Thanks a ton. I hope you will stick with me for the next year too.
Posted by Black Kush at 8:43 AM 12 comments:

The rebels have finally reached a consensus on how to move forward towards negotiations with the government. However, it is not clear who will represent them in talks. It is still hard to see how they will workout the final details.

Meanwhile, the SLM leader has his own plans for Darfur, a three-prong approach he called conflict suspension, conflict resolution and conflict transformation. Now we wait and see how the process is going to turn out.

Next stop for the AU/Un mediators: Khartoum.
Posted by Black Kush at 9:45 AM 3 comments:

The meeting to unify the ranks of the fragmented Darfur rebel movements is going on in Arusha, Tanzania. The AU and UN are hoping that they will be able to front one voice for talks with the regime in Khartoum. But will they?

Is the rebel group of Abdel Wahid el Nur right in not attending the reconciliation talks? He claims he will not attend the talks until fighting stops in Darfur and a multilateral ceasefire is in place. Unfortunately for him his actions will bring more damage to the people of Darfur. If they are fighting the same cause, at least he should go and listen to what the others are saying. His claims will be legimate if he joint the other groups, THEN demand cessation and disarmament of the Janjaweed or whatever as ONE voice. It will have more effect than his sole rantings.

The UN had already secured the force for Darfur, and he should not put himself as an obstacle now, for the sake of his people . . .
Posted by Black Kush at 7:45 PM 5 comments:

Sudan has won a huge diplomatic coup with its acceptance of the new hybrid force for Darfur. UNAMID (United Nations African Union Mission in Darfur) will be a force that follows Sudanese demands: African structure, no chapter seven, no force disarmaments, no threat of sanctions. As the FM said, Resolution 1769 was made with their full consultation.

True, the international community watered down the resolution in order to avoid veto by China and ensure Sudanese acceptance. What happen next? With the rebels divided into a dozen faction and some refusing to attend the Arusha talks, Sudan looks on with glee!

Now the international community will have to work hard to unify the rebel command for a political settlement.
Posted by Black Kush at 9:14 AM 7 comments: